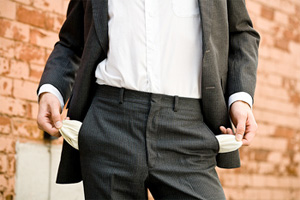 Unfortunately, there is a correlation between bad economic times and higher crime rates.

The number of robberies, burglaries and auto thefts almost always increases dramatically when times get tough, and the worse the economy gets the more these and other crimes are likely to occur. Sometimes people who would normally be law abiding citizens get pushed over the edge and participate in unlawful deeds that they would never even consider otherwise. People may feel that stealing from businesses or individuals may be the only way for them to survive. To make matters worse, as times get tough financially many police departments are forced to endure budget cuts, limit the number of officers they have on patrol, hold off on purchasing necessary equipment and discontinue important community and social programs that help keep young people away from a life of crime, gangs and other illegal activities.

Although many of the people who turn to crime during a recession would normally do everything possible to avoid violence, when people get desperate they become likely to do most anything. Both non and violent crime rates increase as people lose their jobs and are forced to fend for themselves. Muggings and other potentially dangerous crimes become far more common, and with fewer police officers on active duty, it is far easier for criminals to get away with their misdeeds.

Some experts insist that increased crime during bad economic times is not caused by people who have lost their jobs. This point of view suggest that the rise in crime is brought on by young men who are frustrated by their inability to start on their career paths and make money. They may have spent years preparing for a certain field, or worked hard to bring themselves out of a bad environment only to discover that they can’t get hired anywhere and have no options. Under these difficult circumstances, many people turn to alcohol for comfort, and that usually makes things worse. Alcohol consumption is commonly associated with an increase in crime. When alcohol is mixed with desperation from bad economic times, the combination can be deadly. Crimes are fare more likely to be violent when the aggressor has been drinking.

How to Protect Yourself

So what can you do to protect yourself? One of the best ways to avoid crime is simply to be aware that you could become a victim at any time. Try not to go out on your own late at night, but if that’s not possible at least stay in areas that are well lit and have plenty of people around. Never park your car in a dark, unattended lot where a predator may be lurking and waiting for someone. Stay alert wherever you go, and pay attention to your surroundings. Watch for predators, and remember that they are looking for someone who appears to be timid that they can take advantage of. You may also want to consider carrying a non lethal self defense weapon that you can use to protect yourself in case of an emergency. Times get tough now and then, and crime rates almost always skyrocket. Your mind set will have a lot to do it. Don’t let yourself become a victim, always be cautious and do what you can to stay away from danger.